Who Is Faster: A Farmer or A Footballer?!

Did you know that a farmer can move very fast when they’ve nearly finished drafting a mob of sheep in the sheep yards and suddenly realise they have forgotten to shut the gate? Surely, their mad dash would rival any footy player’s sprint on the footy field?! Well it’s all set to be proven at Darkan Sheepfest 2019!

Darkan, in the Shire of West Arthur, held an inaugural, and very successful, grassroots country show in February this year and plans are well and truly underway for the next Darkan Sheepfest to be held on Saturday Feb 9, 2019.

The draw-card event will be the inaugural ‘Farm Boot Foot Race’ – think mini ‘Stawell Gift’ but with the added degree of difficulty in having to run in farm boots! Most importantly, however, competitors will need to nominate whether they are running as a farmer or a footballer. Farm work clothes and your favourite footy team jumper is completely optional!

As far as the Darkan Sheepfest committee knows, there has never been a ‘Farmer vs Footballer’ race quite like it. Although it is well known of the legendary Cliff Young, the 61 year old NSW dairy farmer, who won the ‘Sydney to Melbourne Ultramarathon’ by training in his farm gumboots – but that was a shuffle at best, not a sprint!

Paul Duffield, ex-Fremantle Dockers player, coach of the local football team and Darkan sheep farmer has given his full support for Darkan Sheepfest and is also keen to compete in the Farm Boot Foot Race –

“I think it is a great idea and should be a bit of fun. Pre-season training is always hard
to get the boys motivated, but with the Farm Boot Foot Race having some cash prizes,
it should certainly give a bit of incentive for the guys to get fit before next footy season starts. The difficult part for me is deciding whether to compete as a farmer or a footballer, because I am both!”

The agricultural industry has seen some tough times this year, with drought in some parts of WA as well as in NSW and Qld and ironically in the same year some WA crop farmers being wiped out by frost.

Ray Harrington, Shire of West Arthur President, recipient of the Medal of the Order of Australia (OAM) for ‘Service to Primary Industry’ and most recently earning the title of Australian Farming Legend of the Year is excited to see Darkan Sheepfest continue –

“It is more important than ever to remain positive and support our farmers and businesses linked to the agricultural industry. I have been passionate about farming all my life and any event that promotes what we do and gives the rest of the population a chance to experience sheep and wool is a great initiative. I am looking forward to being there and being a part of the day.”

experiences. These skills will be showcased in a ‘Young Farmer Challenge’ demonstration, also a new feature of the Darkan Sheepfest’s 2019 event program.

“I have competed twice in the Farm Skills competition at the Perth Royal Show and look forward toparticipatingintheYoungFarmerChallengeatthenextDarkanSheepfest. Competitions like this give young people interested in the agricultural industry a chance to build and demonstrate their practical farming skills. I think it will add to the great atmosphere at the Darkan Sheepfest and get more young people involved.”

As well as the Darkan Sheepfest adding several new and exciting events to the program, you will still enjoy the sport shear competition, wool fashions parades, sheepdog show and be able to cool off on all the waterslides. But ultimately it will still have that good old country show feel that everybody will not stop talking about for a long time after.

“Having been born and raised into the sheep and wool way of life, it’s easy to appreciate the lifestyle we have. But don’t take my word for it; see for yourself by visiting the West Arthur Shire. Working in the industry helps you realise that we are truly part of such a great source of food and fibre for the world. Areas like Darkan are some of the best places in the world in producing these vital commodities; we have a great history of sheep and wool. Come and spend a day in the country alongside our farmers, shearers and inventors at Darkan Sheepfest and find out where the wool story begins.”

The best part is, Darkan Sheepfest entry fee is still only a gold coin donation due to the generous support of all our sponsors including our Supreme Sponsors Darkan Agri Services, Byfields Business Advisers, Elders and Collie & Districts Community Bank.

For all media enquiries please contact Karlene Goss on 0428 361 366 or admin@darkansheepfest.com.au Images below in preview size only. High resolution images can be made available for publishing on request. 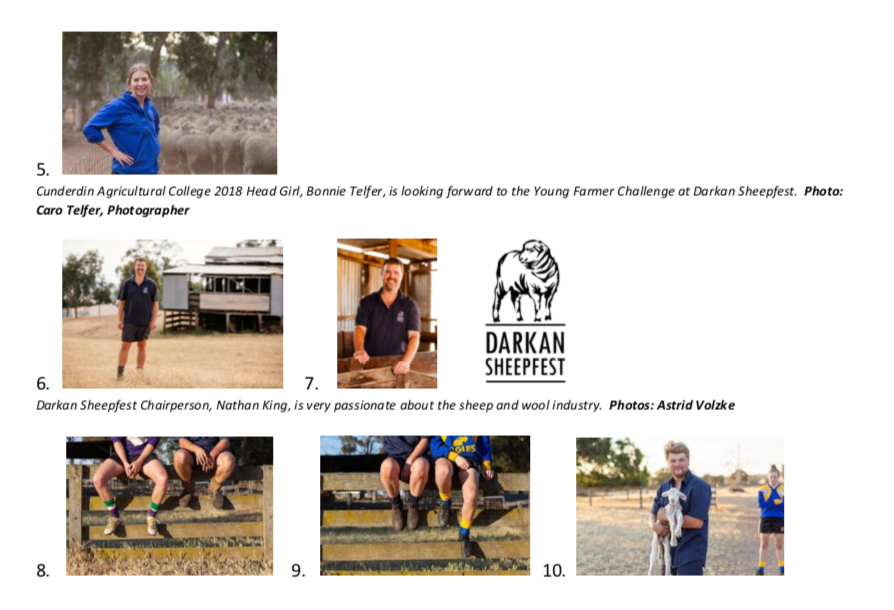 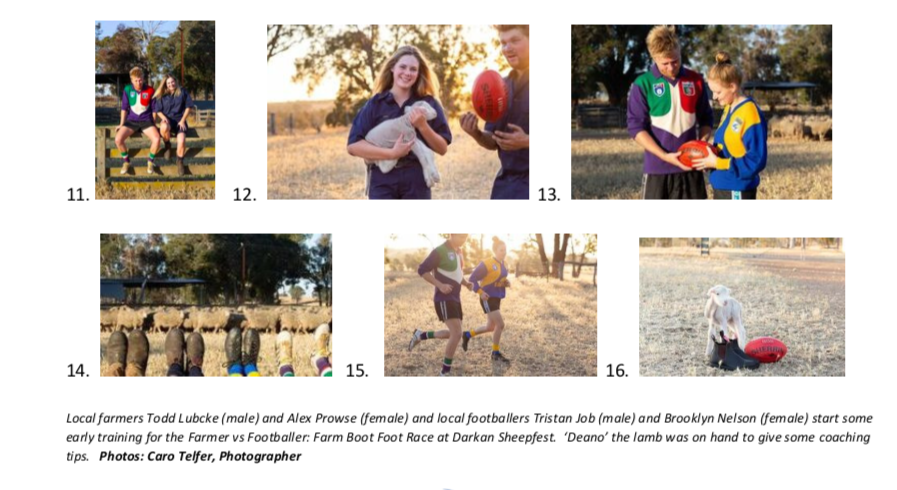